Some success in the garden. 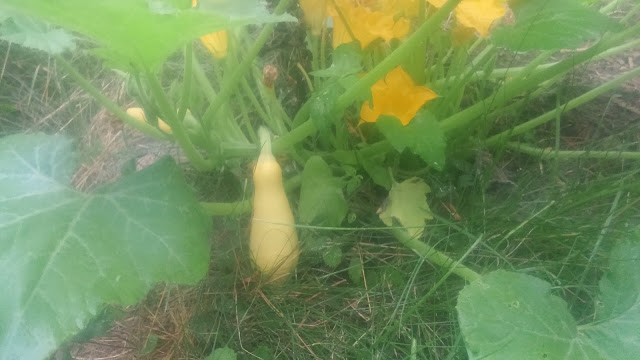 Apologies for the photo quality, not only was it raining today which makes the lighting a little iffy to begin with, I don't have a machine that I can edit photos on right now. Even without edited photos I'm glad to be able to share that our remaining squash plant seems to be doing well. As you can see from the plethora of blossoms it is adding fruit constantly. Not having a trellis isn't seeming to hurt it at all. I'm looking forward to being able to cut summer squash and steam it. 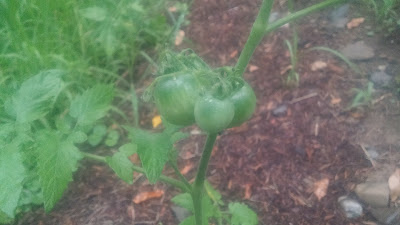 Our tomatoes have also set fruit, and seem to be doing fairly well. Some of the fruit appears a bit crowded as you can see here, though it seems to be growing fine. From how close the fruit is set these are probably sungold tomatoes since I think that's the only kind of cherry tomato I planted this year. The tomato plants are very stunted this year compared to the past, and we didn't even plant them late. They just haven't been doing well. Some of that is probably us having not used the bunny fertilizer we've used so liberally in the past, some of it is probably the very strange weather we've been getting with cold nights, and scorching dry periods. 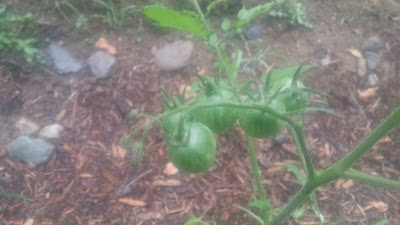 Given the attention we've been able to give the garden at all this year I think it actually speaks very well to the benefits of mulch. If we'd given as little attention and watering to our plants in the past they'd probably be dead by now. With mulch they seem to be able to retain moisture well, and stay hydrated which has prevented the tomato plants from having strange split tomatoes, or just turning yellow and drooping after a week of no rain and hot sun. When we garden in the future I intend to make sure we mulch our garden beds, because the cost seems to be well worth it!

Posted by Coureton at 09:57 No comments:

I'm sorry for not having a post up yesterday, with trying to get everything done, I've been running out of time and brain power. This is especially true as we've started packing up the Critter's things and he's getting upset and concerned about why his things are going away. That's led to evenings being a lot more challenging for us, and less sleep. Either way, while we have gotten rid of a lot of the homesteading things with the rabbits and being down to two chickens, there are still things left to do.

First of all, as you can see the garlic is doing very well. I went through and cut all of the scapes, and have put them in a vase. From the experience of a few seed savers this should give them enough energy to get through flowering. Over the next couple weeks I'm going to be keeping a close eye on them so I can pull the bulbules out and try to give the flowers room so we can save actual seed from them. It's one of those things that I really don't want to let go of  since it's been a goal for some time now.

Another thing that's going on is that the chickens are still very much around, and our red girl has survived and is thriving despite the attack from what I assume was a hawk. Unfortunately her desire to stay close to the house lately has led to some interesting behaviors. Including staring in the dining room window during dinner. The other thing that happens with this has become particularly relevant to my sleep. She's been perching there during the night, and as dawn approaches she starts shifting, and the bush taps the window. That wakes the dog up, who given the events of a couple weeks ago, thinks that the bear is back and wakes up barking. The barking wakes me up, and because you can't assume a false alarm I bounce up, run down stairs, and check for intruders. This of course cuts my sleep short when he does this 3 or 4 times from 4 - 6:30 AM.

Something we haven't discussed a lot in our homesteading talking is dogs and dog training. Dogs are an integral part of homesteading in my mind, and good training is an important part of that. We aren't expert dog trainers is why I haven't talked a lot about training. I would say though if you intend to do homesteading in the future, bone up on your dog training, and get good at it so you aren't looking for the best way to train this kind of false alarm behavior out, without eliminating the alerting behavior we do want!

Finally, we really appreciate all of the help we got on the GoFundMe, The push with the doubling met the goal, and it has helped a good bit. We're still struggling but it has made a huge difference for us, and thank you to everyone who has helped.
Posted by Coureton at 10:19 No comments:

The rain finally came as it always done, and I swear the plants have perked up overnight. That's probably hyperbole, but it definitely feels like it even if it is a psychological thing.

Before I get back to that and focus on the homestead for the rest of the post, I'm going to touch on a couple things. First things first. The Lady of the House is having an art show near us, so if you're in our area and come we'd love to see you.

The other thing is, we're getting so close to the line where we can put the down payment on the furnace, and we're getting close to the end of the donation matching period on our GoFundMe. If you have been thinking of donating, now would be a great time. 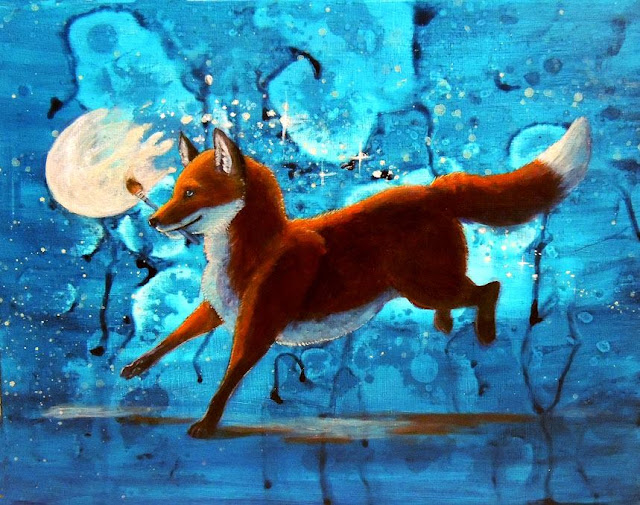 Sending on the coop.

One of the hard things about getting the house ready is how much we'd done to make it ours. Some of that is the chicken coops. Unfortunately when the chickens are gone I'm going to have to just disassemble the big coop in the back. Fortunately, the Lady of the House's father wants to get into chickens so I was able to offload the smaller red coop we used for so long back to him. He actually found that coop for us for free, and hauled it up in the first place. He came up on Saturday, and the two of us moved the coop onto the trailer he brought, took down the chicken run, and packed it up into his trailer. Once that was done we loaded up a lot of the Critters toys, and the electric fencing for the chickens and sent it off to his house. Once that's set up we're going to bring the chickens to his place to watch over until we have a place we can have chickens again.

On the subject of the GoFundMe, we are doing well, and with the donation matching we're getting close to the $5,500 point where we need to be to get the heat and hot water installation begun. Any help you can give before the 1st while the donation matching is still going on would be greatly appreciated. All of the help and sharing we've gotten has been amazing to us. Thank you all.

On the farm side of things, we still desperately need rain.

One of the not entirely unexpected consequences of mowing the lawn short relative to our wild grass and perennial woods clearing. With the drought we've been seeing this summer, despite our nice moist climate relative to the valley, after mowing the lawn regularly we're seeing a lot of sad and browning grass. It's not the vibrant greens that I'm used to seeing our lawn, but it is starting to look more like a normal lawn. With a bit of rain it'll look fine.

On the GoFundMe front we are closing in on enough to put the %50 down payment on the furnace. Right now with the donation matching my father is offering we could reach that goal very quickly. We hope to reach it before August 1st so we can get the house on the market with a firm date of installation for the furnace. Thank you all for listening, sharing, and donating. Our community has been such a huge help to us.

Now on to the rest of the gardening situation.

The Lady of the House had a very interesting experience while I was at work yesterday with a visiting bear. When I say visiting, I mean opening the trash can, and trying to get what little food there is in our trash.

Before I get to that I'm going to touch on our GoFundMe. We finally have a solid estimate on the furnace replacement. It is going to come to $10,550, and we have to pay half up front for them to get started. To help us out my father is offering donation matching dollar for dollar. Right now if you can help, your donation will count double.

That out there, let's get back to the bear, and the Lady of the House.

Email ThisBlogThis!Share to TwitterShare to FacebookShare to Pinterest
Labels: Bear, Dog, Go Fund Me, Lady of the House

Forgot to get the photos for today, so instead I'm just going to do a quick post, after all, this particular post doesn't really need any new photos. Last night I did the last butchering of rabbits that's going to take place here on the homestead. It was a killing that needed to happen, but I still am glad that it's the last one unless I'm going to be teaching people.

Herbie was the last rabbit on the homestead because he wasn't a rabbit we could let move on to another home. We'd tried to give him almost 6 months to recover from the back leg problems he was having, but he never did recover. It seems he may have injured his spine while playing and jumping around in the hutch, and just never was able to move properly after. It's a thing I've been putting off hoping he'd magically get better and we'd be able to pass him on, but it just wasn't happening.

Physically, skill wise, it was one of the easier killings I've done. Both of us were calm, and the physical process went perfectly. On an emotional level, it just confirmed that we made the right choice not to do rabbits anymore even if we were going to be able to stay in the homestead. The question now is, how do I continue to eat ethical meat, and stay healthy? Mostly, by eating less meat, and only buying from ethical sources.

But to be honest while we're in the process of selling the house and under financial duress, we're probably going to have to compromise and just eat what we can afford, while eating as little meat as we practically can.